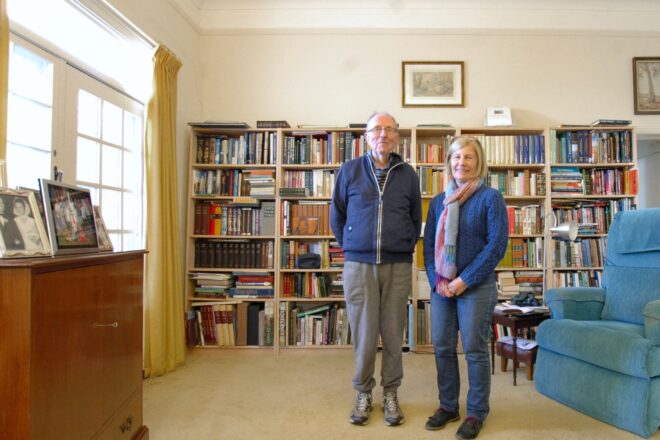 A childhood fascination which grew into a lifetime collection….

As a child Rex Hosking has memories of seeing the books that his parents would borrow from a commercial lending library. He knew then that books were special, as at the time with money being in short supply the family owned no books themselves. As he got older, he was presented with books of his very own as a reward for doing something well, he “got the disease” he says. A lifelong love of collecting (of books in particular) was sparked, which is still with him to this day.

Rex, a former Headmaster who is now in his nineties, has a collection of over 21,000 books, all catalogued by hand and arranged by category across the bookshelves which line the majority of the rooms throughout his house. Over the past few years his daughters have helped him to transform former bedrooms in the old family home into cosy reading rooms. Originally, his collection was squeezed into just two rooms, but after he was sadly widowed five and a half years ago the decision was made to give the collection more space. With standing room only and many shelves stacked over capacity in one of the rooms, it had become dangerously inaccessible and wasn’t being shown off or used to its full potential.

Rex arranges his books primarily by subject with Australian History, Geology, English Literature, the Silk Road and even Lawrence of Arabia being some of his favourite topics. Rex also keeps a number of other collections including maps, his own photographs and slides, music on CD and cassette tape and sporting memorabilia. When it comes to sport, Rex has been a dedicated supporter of the South Adelaide Football Club since he was a boy. There’s a 1964 premiership jersey hung in pride of place on his sitting room wall and he mentions that he’s been to almost all of their matches. Always a keen traveller, he and his wife explored both Australia and the world. During the seventies they were intrepid enough to take on the trans-Siberian railway alone! Rex tells me that whenever he travels to a new destination in Australia, he always tries to find a book about the history of the place to add to his collection, which on the subject of Australian history now numbers over 4,100 items. For many years Rex worked as a guide at the State Library and still belongs to a book club that he founded with a group of fellow guides. Their group chooses a new leader each month and the leader gets to select a topic on which everyone can choose their own book to read. Rex will be leading the next group and has chosen the Black Death as his subject for reading and discussion, after recently completing a course on it.

If there’s one thing that Rex’s remarkable collection demonstrates so well it’s that a love of learning and discovery can flow through an entire lifetime and can lead to a vast and wonderful treasure-trove of knowledge and history. Rex’s love of reading and learning was clearly nurtured by his parents from an early age. Even when he struggled with what he now suspects was dyslexia, his parents gave him every encouragement to stay in school and keep reading. He says that the biggest reason he decided to go into teaching is because in his upper years he didn’t want to leave school! He continued to pursue both learning and teaching for many years after retirement, attending courses at the University of Adelaide, the WEA and even lecturing at the University of the Third Age on one of his favourite subjects — geology. Today Rex still devotes a considerable amount of his time to his collection. He is transferring his many volumes of meticulously handwritten catalogue onto an electronic archive program called End Note Plus, which he learned about during his Geology studies. Rex says this keeps him busy most of the time. His children and grandchildren sometimes borrow books from his collection and of course he still continues to add new items to his shelves whenever a new book happens to catch his eye!