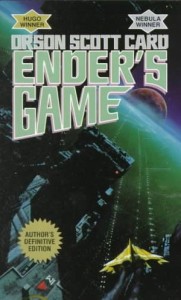 Ender’s Game  by Orson Scott Card is my absolute favorite book. Whilst this may not be universal for all people who have read it, I thought it necessary that I state my rather biased view point going in to this review.

Ender’s Game is about a six year old boy named Ender who is chosen to attend Battle School in order to receive the training that he needs to become a commander in the military, as Earth is in dire need of a strategist  capable of defeating an alien race that has almost wiped out the human race on two occasions before and will be returning for a third try all too soon.

With a highly compelling story and equally as compelling characters I found the book almost impossible to put down, which is a phrase that is thrown about a lot when book reviews are written but in my experience, at least, impossible to put down explains this book perfectly. Whilst it won’t be for everyone this book was certainly for me and will most likely be for you too. Here’s hoping the movie that is releasing on the 31st of this month is just as good.