This is a spoiler-free review of Ernest Cline’s debut novel, Ready Player One.

Ready Player One is a novel that I definitely think deserves more recognition that it has received. It was the best novel that I read in 2013.

It is a dystopian novel set in the 2040s. The world’s economy is collapsing, and natural resources are scarce. 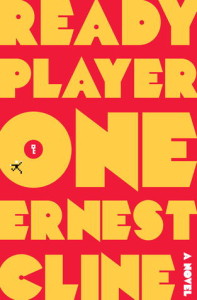 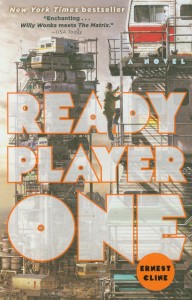 That is the real world, and whilst it is all doom and gloom and heading speedily downwards, the evolution of the internet and online games into a virtual utopia called the OASIS has changed things for the people who live in this world, even more so than the disasters that are destroying their planet.

And then James Halliday dies. With no heirs or living family, I might add.

He leaves behind a video in place of a will, which is circulated to all users of the OASIS the morning after his death. This video explains that Halliday, whilst programming the OASIS, hid three keys (first the Copper Key, then the Jade Key, and finally the Crystal Key) and three matching gates for any user of the OASIS to find.

And whoever does find all three keys and gates and then completes a final challenge will inherit James Halliday’s entire fortune – an estimated 240 billion dollars – and control of his company, including control of the OASIS.

And so begins the hunt for Halliday’s Easter Egg.

Those who search for the egg are called ‘gunters’. These people devote an extraordinary amount of time to studying everything about the 1980s, the era when James Halliday was a teenager and first became a programmer, and the main inspiration for a large portion of the OASIS.

The book opens in 2044, after five years have passed. It follows one gunter in particular. His real-world name is Wade Owen Watts, but it is his OASIS identity of Parzival that is important, because to every other OASIS user, that is who he is.

But things start to get really interesting when–

Actually, I can’t tell you that, so you’re just going to have to read the book.

To summarise: Ready Player One is a brilliant book written by a very knowledgeable author. I think that anyone and everyone who reads adult (or even young adult) dystopian novels should most definitely pick this up. Along with everyone who grew up in the 1980s (apparently there are a lot of references in the books to that era, but I didn’t notice them if there were) or likes video games of that era. You just have to read it.

Ready Player One is an action-packed novel, and will be hard for Ernest Cline to top.

Finally; I cannot wait to see how the movie adaptation pans out. I also look forward to the July release of Cline’s second novel, Armada.

Now please go read it. Trust me, you won’t regret it.