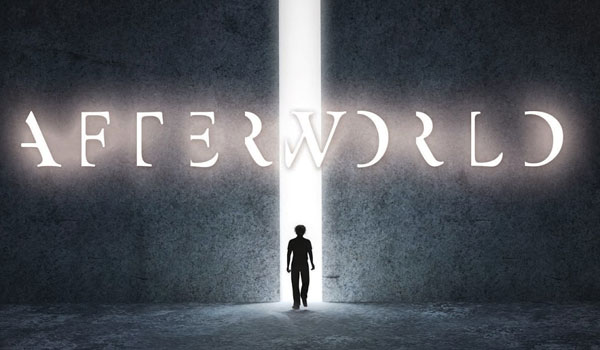 It was the premise of Lynette Lounsbury’s book Afterworld by  that made me want to pick it up, and it is after much contemplation of that same premise that I am writing this review. 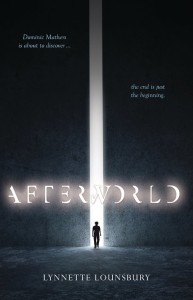 Afterworld is a young adult fantasy novel, published this month, about a fifteen-year-old boy named Dominic Mathers who dies in a car crash in India. Then he begins his journey through the afterlife, which in this book is a duller, queerer version of our planet earth, full of really old, dead people.

Afterworld is an unusual book; not only does it take concepts and themes from many religions regarding the afterlife, incorporate different beliefs about early history and involve multiple races of people living inharmoniously who all converge and destroy everything, it has all of that come back to one boy:

Now, to say more on the plot would be giving away too much, so now I will mention my personal thoughts on the novel.

Looking over the notes I took from when I had just finished the book, and also reflecting back on my experiences whilst reading it, I think that Afterworld, whilst good, wasn’t the best novel I’ve ever read. But before I explain why I didn’t love it as opposed to merely enjoying it, I want to mention what was good about Lynnette Lounsbury’s novel. I found it entertaining and reasonably fast-paced, and it wasn’t all doom, gloom and depressing things. Afterworld was also refreshing to read; it seems that every new book being released at the moment is book three in a dystopian trilogy, so a standalone young adult fantasy novel was a pleasant change.

But I do have to mention some other things about Lynnette Lounsbury’s novel.

I found that some of the secondary characters seemed to blend in with each other, and weren’t interesting to read about. The book also has a lot to explain, and I mean that in two ways. First, it explains a lot of things, and not always in the clearest or the best way. Second, it is rather vague on some details, about the world of the book in particular.

Afterworld contains a lot of complex ideas (which is good), and each of those complex ideas has their own set of complex terms and other points to remember (which is fine). But while there’s nothing wrong with complexity per se, it needs to be done well, which is something I think Lynette Lounsbury has not been able to consistently do. At certain points, the book became very confusing.

All in all, I felt that despite its flaws, Afterworld was an enjoyable book. I would give it 6.5/10. While it was definitely worth my time, and I would certainly recommend it as a standalone young adult fantasy novel, there are other books I would reread first.