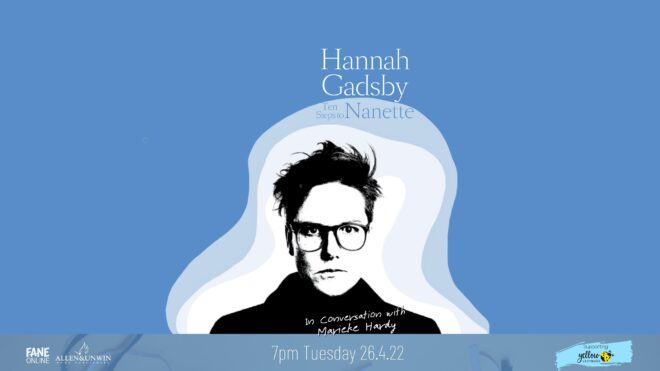 In Conversation with Marieke Hardy

Hannah Gadsby transformed comedy with Nanette, even as she declared that she was quitting stand-up.

Ten Steps To Nanette takes us with Gadsby on the journey through the defining moments of her life, leading to the creation of Nanette, and her powerful decision to tell the truth – no matter the cost.

Treading tension and humour, worldwide fame may have looked like an overnight sensation, but her path from open mic to the global stage was hard-fought, and anything but linear.

‘There is nothing stronger than a broken woman who has rebuilt herself.’

Tracing her growth as a queer Tasmanian – where homosexuality was illegal until 1997 – to her ever-evolving relationship with comedy, her struggle with adult diagnoses of autism and ADHD, and finally, to the backbone of Nanette – the renouncement of the self-deprecation so rife in her early career, the rejection of misogyny, and the moral significance of truth-telling.

In this exclusive online event, Gadsby delves into the stories that have shaped her career with Women of Letters co-creator Marieke Hardy. Part fireside, part living room, this is going to be as revealing and intimate as it is heartfelt and blisteringly honest.

In Conversation with Hannah Gadsby will be broadcast at 7pm AEST, Tuesday 26th April 2022, and available on demand for 7 days.

We are also pleased to be able to offer copies of Ten Steps to Nanette. Books will be shipped once the event has aired.

By taking part in this event, you are providing essential support to Autistic girls and women – all profits of ticket sales go directly to Yellow Ladybugs. Your support is much appreciated.