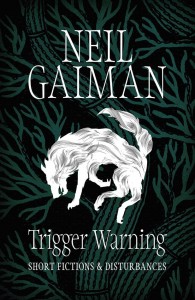 It took me a lot longer than I thought to read Neil Gaiman’s latest collection of short stories, Trigger Warning, published in February this year. And I have to confess that I still haven’t read the whole thing cover-to-cover, for no reason other than that I am too scared. But that is just a mark of Neil Gaiman’s skill.

Trigger Warning is a collection of ‘short fictions and disturbances’, but for the most part it is thought-provoking or macabre rather than disturbing. Though it’s hard not to flinch at times.

I was surprised to find that one of the most enjoyable parts was the introduction to the collection, in which Gaiman explains his inspiration and the context for each of his works. He developed the title for the collection from the concept of trigger warnings on the internet, which have begun to be used in other contexts as well. Should we then consider ourselves warned or prepared for whatever personal responses we may have to the text? I found his exploration of this idea very interesting, but also found myself shying away from certain stories that he introduced with connotations of horror, (‘My Last Landlady’ and ‘Click-Clack the Rattlebag’) taking that to be a kind of trigger warning. The reader is able to learn a lot about the author as a person if they take the time to read the words before the real collection begins, and dispel some of the mystery and ambiguity that tend to surround short stories, which often are removed from a clear context. But this can be what makes them so engaging.

Gaiman is adept in writing short fictions. He balances well the reader’s interest and the subtleties of the messages he conveys. I have always enjoyed Neil Gaiman’s fantasy novels, but this collection goes beyond fantasy to explore a range of different genres and styles, ranging from questionnaires to stories based around tweets (which were quite good, despite their unusual origins) to an episode of Doctor Who, which I have always avoided and never liked, but had to admit was well-written. No two works are alike. In this way, it offers something for every reader, if you have the patience and courage to find it. I do hope that one day I will be able to read those two remaining stories, because if the rest of the collection is anything to go by, Gaiman’s storytelling will be superb.