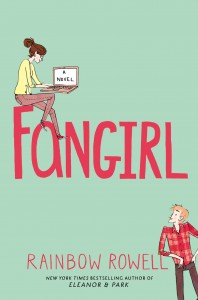 Fangirl by Rainbow Rowell follows Cath, a socially awkward and introverted writer of fan fiction, as she begins her first year of college. When they were in high school, Cath and her twin sister Wren were inseparable, but recently they’ve grown apart; Wren has decided she wants to experience more of the world, whereas Cath would still rather avoid people and live in her fan fiction (which she does try and do throughout the novel).

But then then she meets a boy.

Anyone who reads and/or writes fan fiction (and really anyone who writes anything) will probably find this book enjoyable because they would relate to Cath. She is also the reason why people keep reading – because they are invested in Cath and her story.

This brings me nicely to my opinion on the plot. Or, rather, the lack thereof. While I really enjoyed reading this book, its plot has almost no substance.  Fangirl is just over 460 pages long. It could have been a third of that length, given how little actually happens. This is a coming-of-age-cross-romance novel, and those five words describe everything that happens: the protagonist (Cath) develops as a character and part of that may or may not involve falling in love. (The lack of specificity is due to me not wanting to spoil the ending.) Add to this the ending being very obvious from page 220 (and the fact that I predicted it from page 103), and you have one enjoyable but, ultimately, very shallow book.

Something that surprised me was that this book is written in the 3rd person. While I haven’t read a plethora of young adult contemporary/romance novels, The Fault in Our Stars isn’t written in 3rd person. And neither are most young adult books, in general. The reason I think that I didn’t find this irritating is because the excerpts of fan fiction that Cath writes (as well as the novels it is based on) is also written in 3rd person limited.

Despite my complaints, I would still recommend this book to people who are: