I’ve been meaning to read The Outsiders for ages. It sat on my list of books to read for months, written messily in black biro, sandwiched between Jack Kerouac’s On The Road and Kim Gordon’s memoirs. But a few weeks ago, I found my dad’s paperback edition from the ’80s in the family bookshelf, and I finally got around to reading it! If you’re not familiar with the book, you can read more about it here.

One of the first things that struck me about the book was the way it was written: in first person, from the perspective of 14-year-old Ponyboy Curtis. Ponyboy is a part of the ‘Greasers’, the less privileged of two teenage gangs which inhabit his hometown. (The other gang are known as the ‘Socs’, and think of themselves as better than the Greasers simply because they have more money. In reality, they’re not that different.) The voice that the author, S.E. Hinton, uses is not technically good, with 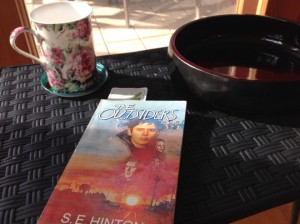 slang and (intentional) bad grammar rife throughout the book. Nor is the way that she introduces the characters – ‘telling’ instead of ‘showing’, which goes completely against what any English student is taught. However, the technicalities don’t really matter with The Outsiders. The voice is completely how I would imagine a teenager like Ponyboy to speak/think/write, and I thought it was perfect for the book. The Outsiders is a great example of learning the rules, and then promptly breaking them, in the best possible way!

Another thing I soon realised was why The Outsiders has become an esteemed staple of young adult literature since its publication in 1967. Perhaps one of the biggest factors in its success is that Hinton herself was fifteen when she began writing the book, truly making it a book written by a teenager for teenagers. Hinton probably took inspiration from her life for parts of the book, making it all the more authentic. Her age and experiences also help the plausibility of the characters.

Another factor in The Outsiders‘ success is its relatability. Whilst the story is not overly relatable to 21st-century teenagers, the characters are a different story. Ponyboy is intelligent and loyal; a teenager gradually undergoing the transformation from child to adult; someone who sees the injustice of life, and dreams of a world where such misfortune doesn’t exist; an adolescent who has lost, and strives to win; a person learning to look beneath the labels and prejudices of society. His oldest brother, Darry, is portrayed as a sullen character who has been forced to grow up, yet as someone who has a good heart underneath all the frost he has created to be seen as ‘tough’; their other brother, Sodapop, is seen as less studious than Ponyboy, yet understanding and kind. The members of the Greasers – Ponyboy’s surrogate family – range from a timid, sensitive young boy to a tougher, older criminal, and everything in between. The reader is likely to identify with a character created within the pages of the novel, giving it even more appeal. And though, as mentioned above, the narrative itself is not particularly relatable, the ideals portrayed by the text are. The book is a story of belonging, finding your identity, coming of age. Every adolescent, no matter what the year, can identify with those.

Another thing that intrigues me about The Outsiders is the controversy that has shrouded it since its release. Even by today’s standards, the book’s portrayal of themes such as underage drinking, violence, crime and death is uncommonly unabashed, especially for young adult fiction. There’s considerable usage of low-level profanities as well, and none of the characters stem from nuclear families – such themes would have been uncommon in teenage literature at the time of the book’s publication. All the characters smoke, too, which  is a topic commonly shied away from in this era, though not necessarily controversial in 1967. The book is even banned in a number of schools across the USA because of the topics Hinton writes about. However, many high-school students study the book and its messages across the world, which helps it to reach a larger audience than it perhaps would have otherwise.

Before reading the book, I had high expectations of The Outsiders. These were well exceeded! I really enjoyed it. If you haven’t read the book, I would highly recommend getting hold of a copy and taking a look.