Traditionally, I don’t read romance books. This could be due to reading too many of those boy-meets-girl-in-clichéd-American-middle-school stories when I was ten. Then there are the substandard writing and overworked plot lines so often associated with the genre. However, I recently glimpsed a book named You’re The Kind Of Girl I Write Songs About (Daniel Herborn, HarperCollins) in my school library. The title and blurb intrigued me, so I decided to disregard my rule and give it a chance…

You’re The Kind of Girl I Write Songs About follows the story of two teenagers who share a passion for rock music. There’s Mandy, who’s taking a gap year and whose plans for the future are as yet undecided, and there’s Tim, a budding singer/songwriter who has suffered a traumatic family situation and is repeating year 12. The pair meet at a gig at which Tim is playing, and are instantly attracted to one another. At first, neither party is confident enough to approach the other, but gradually a relationship forms between the pair. The book tracks the progression of their lives and dreams, their friendships and family relationships, but most importantly their romance.

I was a little unsure of the book at first, but soon enough came to truly love it. The 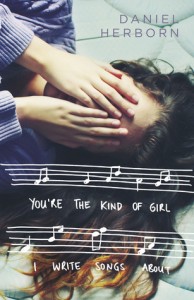 romance was well-written, and didn’t succumb to the common clichés often used by authors of the genre. The book is written in first person from the perspectives of both Mandy and Tim, and Herborn uses this concept very well. I felt that the characters’ differing personalities were handled skilfully, with contrasting character voices mirroring each protagonist’s thoughts and mannerisms perfectly. These multiple perspectives are to the book’s advantage, giving the reader a more balanced and almost omnipresent view of the tale.

The book’s originality, too, is very refreshing. Modern young adult fiction is often based on the same narrative, which has been rehashed more times than anyone would care to count. To read something that diverges from this concept is an enjoyable (and welcome) change! Perhaps my only gripe with the book is that the dialogue feels quite forced on a few occasions. Otherwise, it is excellently written.

I particularly enjoyed the book’s many music references. Unsurprisingly, there is no shortage of these – the book’s title, after all, mentions music, and the two protagonists’ lives virtually revolve around it. As a passionate music fan myself, I especially appreciated this. Both characters are shown listening to bands like Vampire Weekend, The Go Betweens, Joy Division, The Smiths, Elliott Smith and The xx, and they are also often depicted wearing t-shirts displaying artists ranging from David Bowie to The Clash.

One of the elements of the plot is a mixtape, involving songs such as ‘About A Girl’ by Nirvana (my favourite of their songs, from which this post takes its name), and ‘You’re No Rock’n’ Roll Fun’ by Sleater-Kinney. Tim, at one point, even attends a Flaming Lips gig! The book also accurately shows some of the most essential experiences of any music fan: flipping through the music magazine section at the local newsagent, watching hours of rage and so on. While the reader needs a near-encyclopaedic knowledge of alternative music for the book to entirely make sense on first read, the plot line is enough to keep less fanatic readers interested, and it will hopefully introduce them to plenty of artists they wouldn’t have listened to otherwise!

In my opinion, You’re The Kind of Girl I Write Songs About is one of the best young adult novels around at the moment, and is most definitely worth a read!