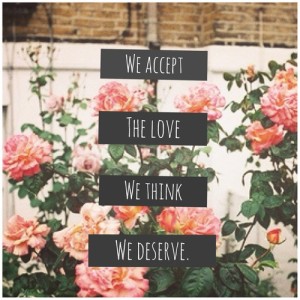 After I saw the movie, I sought out the book and read it immediately. Twice.

I’d heard a little bit about it before I saw the movie, and after I watched the trailer on YouTube I kind of thought ‘I’ll watch the first ten minutes, and if I’m bored I’ll stop.’ I really did think that I would hate it, that it would be another clichéd coming-of-age growing-up story, and I had my doubts seeing Logan Lerman as the main character (after seeing Percy Jackson I didn’t think I could stand something else with him in it) but I really was pleasantly surprised by both his unique portrayal of the protagonist and his genuine acting ability. I also loved seeing Ezra Miller, Emma Watson, Joan Cusack and a refreshingly more-serious-for-once Paul Rudd illuminate their own characters and further amplify Lerman’s performance. Also, the fact that Stephen Chbosky, the author of the novel, actually directed the movie, just made it so much better.

Oh, and The Rocky Horror Picture Show was in it, so needless to say, I was glued to the screen.

Set in the early 90s, the story follows Charlie, who arrives at his new high school reeling from the suicide of his best friend. He is a wallflower – one who sees things and keeps quiet about them, but nevertheless fully understands what is going on. Charlie is evidently an introvert and is deep-thinking, talented and the sole inhabitant of a rich and consuming inner world, but it is clear that there is more at play here than simple shyness. While some of Charlie’s emotional state is explained at the end of the novel, there is definitely more to Charlie than Chbosky ever reveals, hinted at by the apparent naiveté of his fifteen/sixteen years, which as a reader is incredibly interesting to follow.

Because I am, in fact, fifteen, and Charlie’s character resonated quite deeply with me personally (except for perhaps the introvertedness) I found it easy to relate to the book. Charlie tells the story through writing a series of letters to his ‘friend’, whom we can imagine as ourselves, the readers, or someone different entirely. I would recommend it to anybody my age or above, and there are some beautiful insights that really can link with anyone who reads it, whether you’ve finished senior school or are just starting.

It is quite confronting and explicit in terms of sex, drugs and alcohol, but I really don’t want to go into that here. If you think you’re mature enough to read it, go ahead, but tread warily if you’re below fifteen. That’s all I’ll say about that.

I didn’t want to say much about the ending, but I will. It really did affect me more than I thought it would. And lots of people I’ve talked to about the movie said the ending was quite confusing for them, and the way the book paints the ending is even more so. If I didn’t know what was going on at the end before I read it on paper, I myself would have been confused. But it really did make me quite emotional and upset, and was one of the most heartbreaking endings to a story I’ve ever encountered.

I’ll end this review simply by saying that this book was a catalyst for me. It made me want to do things. It made me want to listen to old music and take photos and read and dance and do Secret Santa and eat grilled stickies and make mix tapes and drink milkshakes and feel infinite. I finished it in one day, that’s how gripping it was. It made me laugh out loud at times and feel a dull ache in my chest in other parts, but I think that anyone who reads this book can find something cherishable to stick with them for their entire lives.

I know I certainly did.