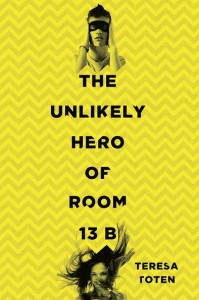 Regular readers will remember that, last post, I broke my rule on reading (or rather, not reading) romance novels when I read a book by the name of You’re The Kind Of Girl I Write Songs About.

Well, I broke it again.

This time, a book named The Unlikely Hero of Room 13B by Teresa Toten was the exception – and just like Songs, I enjoyed it too!

13B follows the story of Adam Ross, a 15-year-old who suffers from severe OCD and who has a complicated family life (to say the least!). He reluctantly begins to attend a support group at the suggestion of his therapist, but it is here that he falls instantly in love with the ‘new girl’, Robyn. Throughout the book, Adam learns of family, first love, how to cope with life’s difficulties, and a lot about growing up.

I’m not going to lie – the romance aspect of the book was, for the most part, really cliched. The story makes use of the ever-annoying ‘love at first sight’ trope. And though many readers will be able to relate to the obsessive, painful crush that Adam nurses for Robyn, their relationship feels unrealistically perfect. Also, much of the dialogue that Adam and Robyn share feels implausibly dramatic and ‘grown-up’, particularly as they are both (presumably) experiencing their first relationship. This disappointed me, as the novel seems like a missed opportunity for Toten to break away from familiar romance tropes; instead, she reproduces what has been written many times before. Despite this, though, it was actually kind of cute, and Adam and Robyn’s relationship was resolved in a surprisingly original way (which you’ll have to read to find out for yourself!) – so there’s that!

For all its faults, The Unlikely Hero of Room 13B is a good book. Among its best attributes is that it will bring a greater awareness of mental illness to its readers. While this is obviously not its sole purpose, it appears that the story aims to educate its readers on what OCD is like. Though I cannot verify the book’s accuracy on this subject, a glance at the acknowledgements shows that Toten has certainly done her research. Her portrayal of OCD should be especially applauded – she never de-humanises the characters (a practice all too common when discussing mental illness in fiction) and believably shows – without romanticising or ‘vilifying’ their OCD – how their lives are affected. It saddens me that mental illness remains somewhat taboo, well into the 21st Century – yet awareness is certainly increasing, and perhaps this book will help the cause.

Despite my complaints, I really enjoyed The Unlikely Hero of Room 13B! While it may not become a YA classic, it’s a polished book that would be enjoyed by most of the genre’s demographic.

And I should really re-think that rule…