So over this past year, I’ve begun to attempt to become as well-read in the “cult classic” canon as possible, which I’ve also semi-documented on here too. So far, the series includes my previous post on On The Road, plus this one on Slouching Towards Bethlehem  – future ones will include A Clockwork Orange, Howl, Kaddish and Other Poems, Carol and The Man Who Fell To Earth, all of which I’ve recently read, plus probably One Flew Over The Cuckoo’s Nest, The Bell Jar, The Great Gatsby and Nineteen Eighty-Four, all of which currently sit in assorted places around my house, ready for when algebra revision won’t eat up all my reading time … Enjoy! 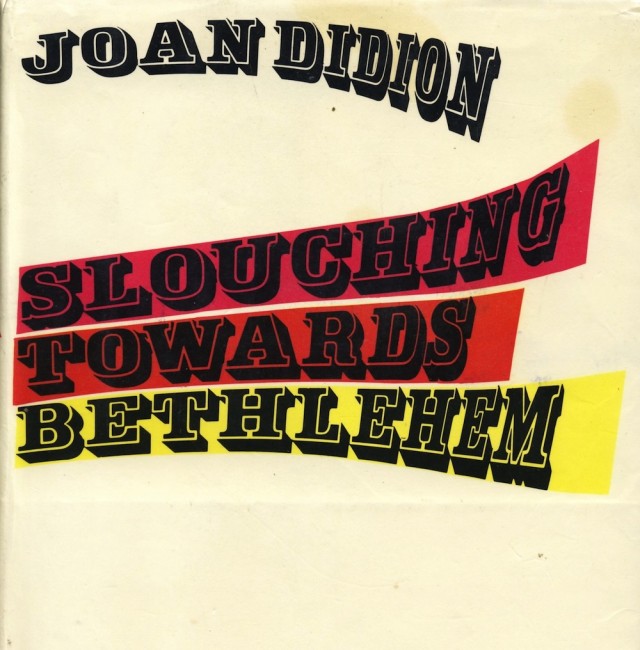 There are some books which are destined to entirely engross and change the course of your life. These books are perhaps the most beautiful, the most eloquent, the most thoughtful thing you’ve ever laid your eyes across, and you know – almost as immediately as you dive into the first chapter – that it will force you to spend the rest of your life rereading it on endless loop and quoting its every word to everyone you meet. I have been lucky enough to have been blessed with a couple of books of this ilk within my life. Joan Didion’s Slouching Towards Bethlehem is one of these. Perhaps it is the greatest of them all.

“I think we are well-advised to keep on nodding terms with the people we used to be, whether we find them attractive company or not.”

(from ‘On Keeping a Notebook’)

Bethlehem first appeared on the shelves of bookshops and bedrooms alike in 1968. Consisting of a collection of essays and prose that Didion had penned for various publications throughout the 1960s, the book was her first nonfiction work. It is divided into three sections, with around six or seven essays in each: “Life Styles in the Golden Land,” which is themed on California and society, “Personals,” which is themed around Didion’s own musings and life, and “Seven Places of The Mind,” which focuses on various places around America that affected Didion’s life. Didion writes about an assortment of subjects: on being young, self-respect, the hippie movement, Joan Baez and her Institute for the Study of Nonviolence, John Wayne, Howard Hughes, Hawaii, New York, communism, her family, the “American dream”, the effect of “Las Vegas marriages” on society, the juxtaposition of outsiders’ perceptions of California as a “paradise” and of a then-topical, somewhat horrific murder case that had recently occurred in San Bernardino … Perhaps the manner in which each of these subjects contrasts the other makes it, to someone who has never read the book, seem incoherent and directionless – yet this could not be further from the truth. It is held together by the atmosphere that Didion cultivates with her extraordinarily insightful and eloquent writing style – an atmosphere that refracts the sunny glamour of California at the time and turns it into the haziest, darkest, craziest, most chaotic, and yet most alluring, most fascinating and most beautiful thing that one can ever lay their eyes upon. It is unbelievably articulate, and yet it is not void of the emotion that is so often missing from some writers of a similar intellect. Even if the book’s subjects were not as interesting as they also happen to be, it would not be too far-fetched to suggest that I – and a myriad of other readers – would probably still hold the book in relatively high regard on the quality of her writing style alone.

Didion in San Francisco in 1967, while writing the book’s title piece – a think piece on the realities of the hippie movement.

And Didion’s essays – both her choice of subjects, and her insights – are just that, too; beautiful, alluringly dark, insightful, thoughtful and fascinating in the greatest sense of the word. She writes passionately and emotively, and yet aloofly, in that effortlessly and mysteriously cool manner that always appeared to be at its most potent in the more sophisticated corners of America throughout the ‘60s and ’70s. Her writings within the book show her to be of the best order of ‘opinionated’ – someone whose thoughts are educated and well-considered, but nonetheless definite and strong – and yet, she never appears to truly take sides on her subjects; instead, she often opts to present her insights as balanced yet captivatingly unique images within each essay, gently nudging the reader to a conclusion of their own.  She curates a fascinating array of contrasting subjects – each gifted with thoughtful metaphors on the workings of American society and the human condition – like a delightfully bizarre contemporary art gallery in the basement underneath a back alley, somewhere. It forces you to think – about humanity, society, culture, our emotions, everything – more than maybe you ever have before. Although it has now become a cliche to say that calling someone a ‘genius’ is a cliche, I feel that, if there were ever any authors deserving of the term, Didion would undoubtedly be well among them – and it is her wisdom imparted within her writing that cements this.

“One of the mixed blessings of being twenty and twenty-one and even twenty-three is the conviction that nothing like this, all evidence to the contrary notwithstanding, has ever happened before.”

(from ‘Goodbye To All That’)

The few occasions where she removes herself from this formula – most notably in the “Personals” section of Bethlehem – make for equally thrilling reading, as well. The almost confessional, thoughtful and diary-like style she uses for these – musings on subjects like rejection, and self-respect, and creativity – predate the advent of the blogosphere by over thirty years, and yet she still manages to considerably better the greater internet-based purveyors of the style. There is little more in this world that makes you think as hard, and make you want to yell, “Yes! I relate!” over and over again to your bedroom walls, and want to carefully write out each essay on little cards to hand out to everyone you pass on the street, than these. It is the kind of writing that you love as obsessively as a music fan might love their favourite band – the kind that sums humanity up so insightfully and beautifully that you feel that not sharing it with as many people as possible would be a disservice to the homo sapiens species. 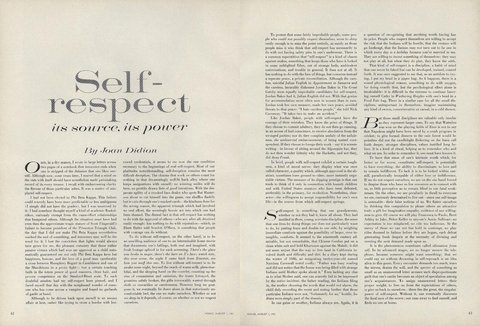 The book’s ‘On Self Respect’, as it was originally published in Vogue in 1961

And yet, these several hundred words I’ve tried to use to explain my love of Bethlehem do not even seem to come close to explaining the sheer exhilaration that is reading the book – how Didion’s musings will utterly enthrall and fascinate you, and make you meditate on the world, like no other book probably will; how reading it drags you into the brand of glamorous Californian cool that she practically created, and how it is only one step short of making you run to your computer to book a one-way ticket to Sacramento; how it, unlike so many books both before and since, is unapologetically feminine in both subject and writing style, and how incredible it is to read this as a young woman. Perhaps only Didion’s own words themselves can do this.

“Our favourite people and our favourite stories become so not by any inherent virtue, but because they illustrate something deep in the grain, something unadmitted.”

Slouching Towards Bethlehem is one of the most incredible things I have ever had the pleasure of reading. Go buy yourself a copy. It will change your life.

(And a gold star to everyone who realised that my insertion of quotes between the paragraphs is a reference to the structure of one of the book’s essays, ‘Slouching Towards Bethlehem’!)