Please note: this review is based on my own interpretation of the book and my personal opinions of it. The way I feel about this book may not reflect how others will feel. 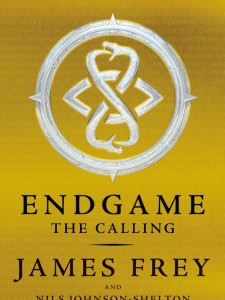 I chose to read Endgame: The Calling by James Frey and Nils Johnson-Shelton because I thought it would be fun to read a book people are saying will be the next Hunger Games. I was wrong – very, very wrong.

First, the premise. Endgame: The Calling is about twelve thirteen- to twenty-year-olds who are each part of one of twelve specific bloodlines from which every living person is descended. These twelve people are ordinary (apart from the minor detail that they’ve been trained almost their whole lives to be warriors/killers) humans who are fighting to save humanity or to destroy the world.

I hated Endgame: The Calling. It was not an enjoyable book to read. The only good thing about this book was that it was reasonably fast-paced. If it had not been, I probably wouldn’t have finished it.

The first page alone demonstrates a number of reasons why I disliked it so much. Firstly, the book is written in the third person, but the present tense is used. This may or may not be a problem in and of itself – it could be (and probably is) this book’s writing style more generally which I despise. Secondly, the first character introduced is a pretentious, narcissistic, ostentatious, unrealistic, unrelatable, arrogant, dull brat. (My thoughts on the other characters are very similar.)

Thirdly, is that the writing style of this book is childish. The way Endgame: The Calling is written is monotonous, using simple words to construct short and simple sentences. Despite this, the book is written with a pretentious kind of immediacy, as though the authors are telling you the events as they happen, and it often feels as though the narrative is being forced upon you.

The childish and monotonous writing style is contrasted with the authors’ use of terms like ‘T7’ and ‘C1’ when referring to bones in the human spine. This use of scientific language feels like an ostentatious display of the authors’ knowledge (which may be plentiful regarding our skeletal structure, but seems to be severely lacking when it comes to writing successfully).

Adding to the impression that the authors of Endgame: The Calling are trying to show off is the fact that every time a measurement is used, an age given, a time period mentioned, or anything to do with numbers happens in the book, these numbers are given ludicrously precisely: 12.25 hours, 13024.838 nautical miles, 19.94 years, 3.126 inches, 11 seconds, 9.91 kilograms, and the list goes on. In almost every instance, this kind of precision is unnecessary and unrealistic. (Because you can obviously tell by holding an object that it weighs 9.91 kilograms. Or that something is 3.126 inches long just by looking at it.)

This brings me to my next problem with this book: it is unrealistic throughout. If this is meant to be something that is ‘actually happening’, as all of the marketing surrounding this book aims to convey, then shouldn’t these characters and this book be somewhat more realistic? (Yes, they most certainly should.) Unfortunately, I cannot list the many reasons why this book is absurd, as they contain spoilers.

I mentioned earlier that Endgame: The Calling, whilst sounding like (and being hyped up by people who probably don’t know what they’re talking about) The Hunger Games, it is not. Endgame: The Calling is not developed enough to compete with Suzanne Collins’ trilogy. By this I mean that the whole concept of this book (and its accompanying nine novellas and two sequels) is flawed.

Whilst I would not recommend that you read this atrocious collection of childish, pretentious, monotonous words masquerading as a book – if you must, then do not expect anything like The Hunger Games.

You might be interested in knowing that there the movie rights to this book have already been sold. Also, this is only the first book in a new dystopian trilogy, with one book being released each year. Nine novellas will also be released between books.

Endgame: The Calling is going to have a puzzle built into it, with a grand prize of 1 million dollars on offer for the person who can solve it.