In January last year, Lynette Washington, a short story writer and Ph.D candidate at Adelaide Uni, called on writers from the university’s postgraduate Creative Writing program to submit for an anthology of short fiction. Apart from a 3000-word limit, the only requirement was that the stories address the idea of ‘beauty’.

‘Immediately it struck us as a theme that would work,’ she told a small audience at Mostly Books last Wednesday night.

At first, she said, she lay awake worrying that her inbox would be flooded with conventionally ‘beautiful’ stories, well-written but uninteresting.

‘Then the first submissions started coming in, and I realised I was an idiot.’

Just as I had hoped, the writers took the theme of beauty and cracked it open, looking at the underside of the idea and the fact that beauty cannot exist without its companion and alter ego – ugliness.

Lynette gave us a glimpse into the process of assembling and editing the anthology. Then, after recommending a couple of her favourite stories from authors who were not in attendance – among them, Amy T. Matthews’ ‘This is the Body of Wonderful Jones’ and Katherine Arguile’s ‘Wabi Sabi’ – she introduced the evening’s first reader: Gillian Britton, whose story ‘Beautiful Girl’ follows an recently remarried architect through a single morning, when her struggle to hold her family together comes to a head.

She turns away. Stares out of the vast, horribly expensive triple-glazed windows that run the length of the passage opposite the kids’ bedrooms. Last night she’d stared out in exactly the same way and seen a mother fox and its litter standing motionless in the field, illuminated by the full moon. She would like to tell Tom this. She would like not to be having this endless wrangle over Lucy.

Rosemary Jackson followed with the blackly humorous ‘Athina and the Sixty Nine Calorie Burn’, a story told through the blog posts of an anorexic high school student, as well as from the perspective of the middle-aged man who becomes her lover and enabler.

I’ve found this really cool website for pro-ana’s. Which is what I’ve decided I am. They’ve got pretend names and stuff because if you’re seriously pro-ana your parents and teachers start giving you shit. There’s lots of cool ideas for fooling people like having bits of carrot and celery and shit and kind of nibbling them all day so people think you’re eating all the time BUT there’s hardly any calories and then people stop hassling you.

Because we Gotta Stay Strong! And these chicks are all really supportive of each other, so that’s what we’re gonna do here. MWAAH!

Our three presenters formed an impromptu panel to answer questions about short fiction, Creative Writing degrees and the ideas behind their respective stories. ‘Beautiful Girl’, said Gillian, had begun with the image of the fox – something that she had seen and been compelled to use – while Rosemary had been writing partly to explore the dynamic of relationships between older men and younger women, which intrigued her. 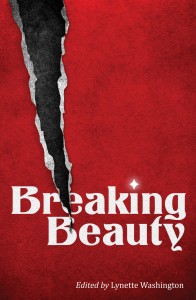 Between glasses of wine and cups of tea, we even managed to sell a few copies of the book.

I wish Lynette all the best with her future editorial projects, and look forward to the day when I can hand-sell a collection of her own stories. Perhaps when the Ph.D. is done?

Breaking Beauty is published by Midnight Sun and is available from Mostly Books for $24.99.