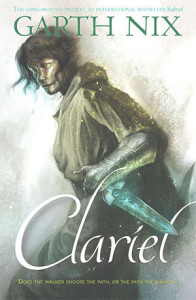 Clariel is the prequel to the Old Kingdom trilogy, a young adult fantasy series written more than a decade ago by well-known Australian author Garth Nix. The original three books, in chronological order, are Sabriel, Lirael and Abhorsen. The events of Clariel take place approximately six hundred years before  the beginning of Sabriel.

The book, which takes place in some sort of medieval period, follows almost-eighteen-year-old Clariel, who has just been uprooted from her quiet forest-bordering home and taken to the capital city of the Old Kingdom because her work-obsessed goldsmith mother has been invited to become a part of the city’s goldsmith guild.

Besides being related to a member of one of the highest guilds in Belisaere (the city), Clariel is also related to the King of the realm and the all-powerful, almighty line of sorcerers called the Abhorsens. Clariel doesn’t want to become involved with the politics at play in this city and does not want anything to do with the mess her parents have put her in, but when she discovers that the fate of Belisaere, and to an extent, the whole land, is at stake, she doesn’t have a choice.

If I told you anything more about the plot, I would spoil the book, so here ends my synopsis.

As for my thoughts on the book – I enjoyed it, but it wasn’t as good as the other three books in the series. Specifically, the first third of the book was slow, the middle third was only slightly faster, and the final third felt too rushed for the rest of the book. Also, I didn’t like the epilogue. The whole thing felt tacked-on and the last line or two contradicted the rest of the epilogue and felt like it had been put there so the book would have a ‘deep and meaningful’ last line.

Although not a bad book, for me, it just did not meet the standard set by the original three books. Clariel is about a 3/5 star book.

Sabriel, and this series of books in general, are international bestsellers, and very highly regarded in the young adult fantasy genre.