Another book I have read and reviewed recently is called Apple and Rain (Sarah Crossan). It’s a bit of a typical tweenange fiction book, and the storyline was relatively unoriginal. But regardless, it was still quite a good book. 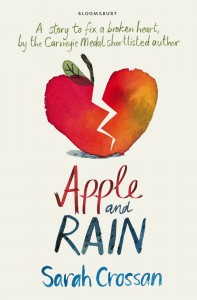 thirteen years of her life. She yearns for the mother who disappeared one Christmas Eve over a decade prior. One day, Apple is pulled out of school only to find her mother has returned. She disregards the pleas of her grandmother (and her father), packs her bags, and goes to live with her mother. But Apple soon discovers she is not her mother’s only child. She finds that she has a younger half-sibling (Rain) who is also living with Apple’s mother. Rain is convinced that her doll, Jenny, is a living child, and clearly suffers from a mental illness of some kind.

Apple is still convinced her mother is ‘the coolest person she’s ever met’, despite the fact that she expects Apple to look after her flat and babysit Rain whilst she looks for acting jobs for unpredictable amounts of time. But when her mother disappears one evening (in pursuit of one of these “acting jobs”), Apple realises that perhaps her mother isn’t quite who she thought she was.

I enjoyed Apple and Rain, but found it quite clichéd. The storyline is very similar to a lot of other books I have read, and the “twists and turns” were fairly predictable. However, I still very much liked the book. Recommended to an age bracket of 11-14.