We were first introduced to the child spy, Ruby Redfort in Lauren Child’s ‘Clarice Bean’ novels as the lead character in Clarice’s favourite book and TV series. Now, with five novels  under her own name, this spin-off has become incredibly successful in its own right – something that most spin-off series cannot boast about.

Ruby Redfort is 13 years old, ‘every smart kid’s smart kid’, top secret agency, Spectrum’s, youngest code-breaker, and self-appointed spy. Along with her family’s butler, well that’s who most people think he is,  and her best friend, Clancy Crew, Ruby gets herself in and out of trouble and solves the mysteries that adults fail to see until it is too late. 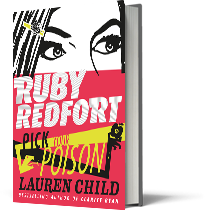 The latest novel, released in November last year, is set to be the penultimate installation in the series. Pick Your Poison sees Spectrum face a new threat, from the inside. Despite being the youngest and bravest of Spectrum’s agents, and coming off the back of four high-profile and (mostly) solved cases, Ruby herself comes under suspicion.

Ruby Redfort is  a far more fantastical character than Clarice Bean, who always surprised me with her authenticity, ever was. It is certainly convenient that Ruby’s parents are rich, well-connected and, most importantly, completely oblivious to what their only daughter gets up to.  But when the series as viewed as the adventure novels that Clarice Bean herself adored, the result is a very successful and enjoyable read, and one that could be easily translated to the screen. That is not to say that Ruby has no depth. She is a very well-constructed and humanly flawed character. In addition to this, the codes and puzzles littered throughout the series are complex and authentic (co-constructed by professional mathematicians) and invite the reader to learn more by solving them for themselves to unlock parts of the Ruby Redfort official website.  It is Ruby’s intelligence and ability to solve these codes that affords her believability, less so her miraculous survival of impossible feats.

This is a spy come adventure series at it’s best. I would highly recommend starting at the beginning and working your way through these books to fully appreciate the web of mystery that Lauren Child has created. Their size and imposing hard-back covers are daunting at first, but they are an easy read!

Some scenes may frighten younger children, and some mysteries are more chilling than others, but I think these novels would be enjoyed by adventure-lovers aged 11-16.