For those lucky enough to be in a book club, we’ve got twelve recommendations that might have gone under the radar for your next year’s worth of reads.

Happiness – Aminatta Forna
A novel of coincidental meetings and the unseen side of London
A Gentleman in Moscow – Amor Towles
Charming historical fiction that paints a picture of Russia after the fall of the Czar
The Death of Noah Glass – Gail Jones
A beautiful and lyrical novel about grief and love, with a compelling mystery at its heart
Circe – Madeline Miller
This feminist retelling of The Odyssey pays homage to the original while breathing new life into the ancient myth
Pachinko – Min Jin Lee
A sprawling family story over several generations of a Korean Japanese migrant family
Normal People – Sally Rooney
Two young people orbit each other in this intimate and beautiful novel about class and power
An American Marriage – Tayari Jones
A young married couple is ripped apart by injustice – will they find their way back together?

Eggshell Skull – Bri Lee
A gripping look at the justice system for victims of sexual abuse, from both sides of the courtroom
The Trauma Cleaner – Sarah Krasnostein
The biography of an incredible woman, working with society’s most vulnerable
Amateur – Thomas Page McBee
Page McBee analyses the complicated relationship between men and violence as he trains to fight in an amateur boxing match
Built – Roma Agrawal
Humans have sought to build higher and higher throughout history, but what advances have we had to make along the way to satiate our need for height?
The Feather Thief – Kirk Wallace Johnson
The invaluable theft of bird specimens from the British Natural History Museum is examined in compelling detail 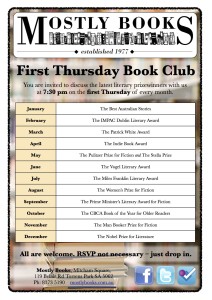 With three independently-run book clubs on the second, third and last Thursdays of the month respectively, we thought it was time to claim the remaining Thursday and start a club of our own!

Our new First Thursday Book Club will be open to all on a drop-in basis. Starting in April with the Indie Book Award, we’ll read our way through a year’s worth of literary prizewinners.

We’ll schedule an extra meeting to discuss the winner of the Stella Prize on the first available leap-Thursday (that is, the fourth Thursday of a month with five Thursdays) after the end of April.

Then, while we wait for the award season to begin again, we’ll revisit some awards from the previous year that we couldn’t fit in.

The discussion begins at 7:30 pm on Thursday November 7 with the winner of the Man Booker Prize for Fiction – whatever it turns out to be. Then, on Thursday December 5, we’ll discuss Alice Munro, who has just won the 2013 Nobel Prize for Literature.

Hope to see you there!