Having rewatched it virtually every night on loop for the better part of two years, you would be correct in assuming that one of my favourite TV shows is Gilmore Girls. This is for a variety of reasons – the perfect melding of comedy and emotion, the small-town 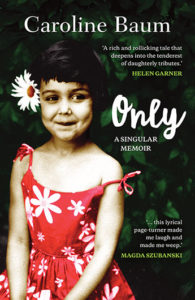 quirkiness, the fact that it seems like it has taken various plot points directly out of my life at times – but among the main ones is its portrayal of the only child. As an only child myself, it is refreshing to find media representation of our kind that doesn’t reduce us to the stereotype of the spoilt, maladjusted loner.  In fact, the two titular characters (plus the vast majority of the rest of the cast) are only children themselves, and that this is barely even mentioned – letting them are allowed to develop into complex and unique characters of their own accord! So when I began reading Caroline Baum’s Only, I went into it expecting a reflection on the Only Life as nuanced and complex as that of Gilmore Girls. Boy, was I wrong.

Firstly, I should probably tell you what Only is about. Author Caroline Baum recounts her life in relation to her parents and her “only-ness” in a manner that, for the first half of the book at least, is told in a manner that so heavily and unconsciously relies on stereotypes that have followed onlies for millennia that you are forced to cringe at her lack of self-awareness. However, there is some heart-breakingly sad material toward the second half of the novel that partially compensates for this – but more on this later.

I found the first half of the book, discussing the ins-and-outs of her incredibly privileged and spoilt London childhood, extraordinarily tiresome and cringeworthy. This perhaps sounds a little blunt, but there are only so many times you can read someone casually and somewhat ungratefully describe the hundreds of designer clothing pieces they owned before their tenth birthday when you’ve been trying to convince people that “only child” doesn’t equate to “spoilt brat” since you were five. Baum not only does nothing to shrug off this stereotype – she so nonchalantly recounts the virtues of her beyond-privileged childhood throughout this section that one has to assume that she is in fact so privileged that she doesn’t even realise that this is the case, and she comes off as all the more frustratingly entitled for it. My favourite example: there is one part in the book where she discusses the maid from her childhood home and how, as a kid, she thought it was awfully funny to unplug said maid’s vacuum cleaner and tie her apron strings to the doorknob while she wasn’t looking – and then expressed genuine confusion when she later mentioned that, despite several letter-writing attempts from her mother, the maid refused to talk to her family after she retired! Although she does, at one point, refer to her childhood-self as an “unappreciative, ungrateful, obnoxious snob”, she does so in an equally obnoxious, self-piteous manner seemingly only to elicit sympathy from the reader – her refusal to take responsibility for this behaviour, so unironically and presented to us without self-awareness, is just as repulsive as the behaviour itself.

Baum also blames a lot of her adult problems on her only child status; she claims that “three barely felt like a family”, that all it did was lay on her an incredible social awkwardness, an unquenchable loneliness, and the impossible task of being a “Good Daughter” on her; while never considering that, perhaps, the extravagant European holidays, the designer clothing, the London mansion, and the private school education (all of which she repeatedly takes for granted throughout the narrative) would have been harder if her parents had to support another sibling. And while I appreciate that this attitude stems from the period in which she grew up, where only children were seen as grossly impaired by some, I find her assumption that we are all unhappy with our apparently-identical experiences preposterous and insulting – I, for one, have found my only child experience beautiful and rewarding, and I would hate to imagine it any other way. Imagine someone saying that all people with two siblings are the same! However, she does make some valid suggestions about how society views us onlies almost like a freak show – I found myself nodding vigorously in agreement whenever she made mention of the invasive questions about our personal lives that non-onlies somehow feel are appropriate to ask, an experience that most of us know all too well!

Aside from the content matter, though, the book is also not particularly well written. Baum has a serious case of purple prose, utilising so many adjectives, colloquialisms, and similes that reading her memoir might as well be the first in a series of Where’s Wally spin-offs called Where’s The Noun – in fact, some of the phrases she uses are almost verbatim quotes from the examples that my English teachers have used when telling us about the negative effect of purple prose in the first place. And on the subject of similes, let me just leave this beauty for your consideration: “Like a child who has just discovered masturbation, I simply could not leave [writing] alone.” Well, um…

However, while I have spent the better part of three paragraphs disparaging her book, it is undeniable that Baum’s work also carries extreme emotional resonance. Even within its dreaded first half, there are gutwrenching diamonds among the rough; I felt incredible, genuine sadness for the young Baum when she recounted her inner conflict surrounding her otherwise-loving father’s punishment methods, of how the dysfunctionality of her parents’ lives was unfairly placed upon her shoulders, and when she failed to gain acceptance to Oxford (which she’d dreamt of attending her entire life). This was increased further within two parts that are easily the best-written and most profound of the whole book – the two chapters in which Baum discusses her parents’ tragic childhoods (her father one of the few of his family to survive the Holocaust, her mother’s mother dead in a murder-suicide after suffering years of domestic violence by the time she was five), and the shorter, second half of the book where the reader sees Baum’s intelligent, funny father painfully disintegrate into dementia. Genuine, devastating emotion is conveyed within these areas, and the reader is forced to go along with it – it is so saddening that I, for one, almost felt a relief when her father passes away at the end of the book, as his suffering felt so horrible. These sections are probably the explanation behind Baum’s entitled, blame-deflecting attitude – and while I still find it insufferable and mostly inexcusable, the pity and empathy I felt for her counteracted this a little bit.

And while I did indeed largely dislike the book, I would still encourage anyone interested to go read it. I am aware that my antagonistic perception toward her portrayal of her experiences is hugely coloured by my own upbringing, and that my impatience toward her writing style is probably exaggerated by the high standards that Joan Didion has set for every book I’ve read post-Slouching Towards Bethlehem – perhaps you are not affected by these factors, and you might give it four stars! I would also be lying if I said I didn’t find parts of the book genuinely moving and enjoyable. In fact, while most people say that reading a book you dislike is a waste of your time, I would go so far to say that it is this book that proves this wrong – it has generated so many interesting and exciting discussions and thoughts about writing, family, and the human condition over these past few months, and it has taught me all sorts of lessons about opinions and subjectivity! I urge you to go buy a copy yourselves, and make up your own mind …