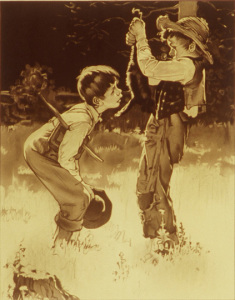 I’m aware that I’m reviewing a classic, so I’ll try to remain as objective as possible.

The Adventures of Huckleberry Finn by Mark Twain probably has the biggest claim to being the Great American Novel. Intended at first as a simple story of a boy’s adventures in the Mississippi Valley – a sequel to The Adventures of Tom Sawyer – the book quickly blooms under Twain’s hand into a work of immeasurable richness and complexity.

I haven’t read Tom Sawyer, but I think that I probably bet on the right horse when I chose Huckleberry Finn over it. I won’t deny it took me a while to get through, being much longer than Tom Sawyer, but personally I found it far more rewarding. Tom Sawyer (the main character, who also appears in Huckleberry Finn) is all fun and games, and of course there’s nothing wrong with that. However, Huck seems to be a more developed character, more concerned with doing the right thing. Huckleberry Finn tells the story of how Huck helps a runaway slave escape and become free, and throughout he weighs up his own morals against the morals of the society that he finds himself in. Twain satirises the topsy-turvy morals of the slavery-era south. His protagonists, Huck and Jim, are two people at the bottom rung of the social latter – a runaway slave and the son of the town drunk. Though they’re not valued by society, they turn out to be the two most honourable characters of the book.

I think, perhaps, the difference between Huckleberry Finn and Tom Sawyer is that Huck tends to put more emphasis on the stakes of the situation. Huck isn’t subtle about anything; he’s honest and lets us know step-by-step what he’s thinking. Twain pulls off a wonderful twist near the end of the book: Sawyer suddenly reappears on the scene, pulling the same hijinks he always has, but now we see them through Huck’s and Jim’s eyes. Huck wants to find the most direct solution to the problem of freeing Jim, who’s been recaptured, but of course Tom wants to complicate things, as he always does. So rather than just pulling a loose board out and making off, Tom insists on digging under the wall, and loosing bugs into Jim’s prison so he can be properly ‘prisonerish’, and finally warning the family about the impending escape to make the whole thing more dangerous.

While Sawyer did horrible things in his own book – most notably faking his own death so his Aunt Polly could about die of sadness – we forgave him then because the book was a lark, told through his eyes, and we understood that it was all about fun. Twain takes a leap in Huck Finn, showing us an adult world and then showing us what real stakes look like when Tom Sawyer gets a hold of them, and it’s sad to watch Tom toy with Jim’s life this way. This radical flip elevates Huck Finn considerably.

I only really had one negative point, which was that Jim’s character didn’t really drive the plot very much. He never pushes anything forward himself. He’s certainly shown to be kind, and we’re allowed to see him weeping for his separated wife and children, and we get to see his heavily allegorical refusal to allow Tom to throw rattlesnakes into his prison to make it more realistic. We’re allowed into Jim’s humanity, yeah, but he never gets to drive the plot. At the end, when he realizes that he’d been a free man all along, and Huck didn’t know it but Tom did and Tom was just playing… I wanted a moment of anger from him, not just a constant passivity. Didn’t he deserve it? He’s been tortured by Tom’s manipulation for months on end. Shouldn’t Jim have had a moment when he said, ‘What about my wife and kids?’

All in all, The Adventures of Huckleberry Finn is not one to be missed. The language is full and rich, and I don’t think I could ever get sick of listening to Huck’s voice. There’s something deliciously humble about the way that Twain paints him… I’m not really sure what it was, but it had a certain charm about it. A certain spirit that I found admirable. Some of the passages where he’s crafting opposing arguments in his head and working things through were some of my favourite parts, just because of the way they’re written. He’s honest, cheeky and believable, and is now one of my favourite fictional characters.

This is just a quick sidenote here, but I recently saw a movie called Mud starring Matthew McConaughey, and the plot was quite similar to Huckleberry Finn. The acting was superb, the direction very classy for a small-budget movie, and I highly recommend you watch it. 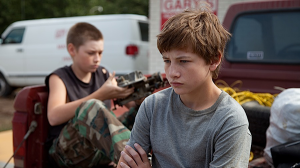