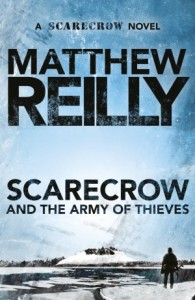 For about five months now, I have been reading books by Matthew Reilly. The fourth book in his popular Scarecrow series is Scarecrow and the Army of Thieves. I chose to read this book for English this term. To complete the work, I had to write a series of blog posts on this book. Below are the posts. I wrote first when I was about halfway through the book, and the second post was a review and written after I had finished it.

Scarecrow and the Army of Thieves by Matthew Reilly is an adult novel. This becomes obvious as the story progresses and the pace and intensity increase. Whilst I don’t mind reading some of the gorier scenes, they are not for everyone. In one particular scene, a grenade goes of and sprays silver acid over a polar bear. This acid begins to melt the bear’s pelt off of its skin, before dripping down to the polar bear’s stomach and melting through it, allowing the bear’s intestines to drip out onto the ground. The bear, who happens to be genetically altered to be crazy, is agitated by its intestines falling out, and claws at its own face. The bear’s face then comes off.

But the blood, guts and gore do not detract from the story. Matthew Reilly is an action writer, and Scarecrow and the Army of Thieves is an action novel. The writing style is fast, as is the pace of the book.

I have as yet said nothing regarding my thoughts on the novel’s plot and its characters. This is because the plot seems to be coming to an end halfway through the novel, although I expect that things are not as they currently seem. As this is the fourth book in a series, I can’t go into the characters and their development and what happens with them in this book because it will spoil the series.

WARNING: This book contains graphic descriptions of violence, death and torture. It also has strong themes. This review also outlines this content.

Scarecrow and the Army of Thieves is the most intense of the five Matthew Reilly books I have read so far. I think that ‘intense’ perfectly describes this book, actually.

The fourth book in the appropriately named Scarecrow series, Scarecrow and the Army of Thieves is an adult action novel that follows US Marine Shane Schofield, call-sign: SCARECROW. In this instalment, Schofield and small team of civilians and Marines have been sent up to the Arctic to test weaponry and equipment that the US Army is considering adding to their arsenal.

But that’s only the beginning, because there’s a lot more going on up in the arctic than Schofield, or anyone, really, suspects.

And to find out any more, you’ll have to read the book.

This was, as I predicted, fast-paced, action-packed, nail-biting, jaw-dropping and actually quicker than I thought it would be: I read half the book in a day.

Another thing I want to talk about is this book, and this series, being ‘adult’. I can understand why these books are marketed at adults; they are gruesome, violent and intense, with high levels of blood and gore and very strong themes.

Whilst I do not think that these things should stop people my age reading these books, I do think that people should be educated on the content of the books. I gave an example of the blood and gore in my mid-way blog post. That was a brief description of what happened to one unfortunate polar bear. But this brutality and grotesquery is not restricted to animals – plenty of characters, including characters of some importance, have similar things happen to them.

I was struck by the casualness of one phrase that I came across. In this scene, people are dying, but one person in particular is sacrificed to protect the main characters. The killer puts a gun in the victim’s mouth and pulls the trigger. The victim’s head explodes and their brains go everywhere.

Incidents like this are commonplace. One of the more severe scenes involves torture. Someone (I will not say whom – I don’t want to spoil anything) has a box put over a person’s head. One or two rats are then dropped into the box. The rats eat off the person’s face. When the box is taken off, the bloody and headless body is described graphically, as is the method in which the rats would have killed this person.

But these things do not make Scarecrow and the Army of Thieves a bad book. The graphic content is not constant; the book could not be reasonably retitled How to Kill Someone With Rats. It does not promote the murder of human beings with rats as a good thing to do. It simply has these things in the story.

I like this book, despite this content, and I like Matthew Reilly as an author, proof of which is that I continue to buy and read new books in his series because I want to, not because I feel obliged to finish what I have started.

These are good books, and this is a good series – 4/5 or 4.5/5 for every book. I recommend that you read Ice Station, the first book in this series. It is not nearly as graphic, but it isn’t as fast-paced either. However that doesn’t mean that it isn’t absolutely crazy, and that every character who lived through the book could easily have died a dozen times. These books are thrillers, and they certainly do thrill!