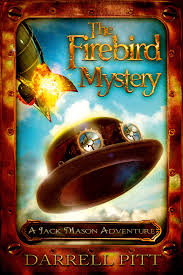 What do you notice first about a book? Is it the title? The cover art? The author? A reduced price sticker? Or perhaps a red dot on the front cover guaranteeing that you will love the book or you can have your money back? While this wasn’t the first thing I noticed about The Firebird Mystery, by ebook author Darrell Pitt, it certainly lingered in my mind as I read the book. Am I the only one who finds it a bit strange that a book could be guaranteed to be loved by everyone who picks it up? Having read this sticker I felt a certain anticipation for what lay in store.

After Jack Mason’s parents die in tragic accident involving a trapeze, faulty safety nets and the only home he has ever known, Jack is sent to live at the inappropriately named Sunnyside Orphanage. That is, until he becomes the assistant of Ignatius Doyle, the best, and most unusual, detective around. Thrown into a whirlwind of danger and mystery, Jack must risk life and limb to help the beautiful and modern Scarlet Bell find her kidnapped father and prevent a terrible weapon being unleashed on the world. But only the combined wits of Mr Doyle, Scarlet and Jack will be able to defeat the evil Professor M.

I loved the plot and setting of this book. The mystery was interesting and I could relate it to real events. The slightly altered London on the brink of World War II was so detailed I could see it clearly in my mind. However, it was quite hard initially to determine where this version of London was coming from. The narrative was written with a huge Victorian influence, Scarlet was a proud suffragette, everything was steam-powered and electrical lights were an alien idea, but giant ‘metrotowers’ reached out into space.

This steampunk paradise was the perfect setting for the story to take place. However, the intricate and mostly well-planned plot just travelled too fast in the beginning of the book. I didn’t get a real feel for Jack’s former life in the circus, and only caught a glimpse of his struggles in the orphanage before he was whisked away to Ignatius Doyle’s side. The pace slowed to introduce this quirky new character and the equally outrageous apartment he lived in, but then picked up promptly after Scarlet was introduced, and thoroughly admired by Jack. After recently reading A Series of Unfortunate Events, these early chapters very much reminded me of Snicket’s fast-paced flair, but as the book wore on the similarities weren’t developed any further. I found it a little hard to believe that Jack would run across London after a suspected murderer for two people he had just met. And the risks kept coming; Jack jumped onto steamships kilometres up in the air, rode on the roof of– . . . well, let’s just say this boy has nine lives.

The relationship between Scarlet and Jack, while sweet, was painstakingly awkward and slow. It seemed like the both of them were very open and vocal about their feelings, but neither acted on them. And the few times Jack did speak up, what he said was not very realistic, even for the era and awkward age they were both in. However as the book is clearly aimed at younger readers, the odd taming of the romance may be intentional.

Overall it is a fun and interesting story that definitely has its highlights. However I can’t say I loved this book. I mostly liked it, but I certainly can’t guarantee that everyone who reads it will think it’s fantastic because it is clearly aimed at kids who are interested in adventures and crazy machines. For the publishers to draw attention to the fact that they are entirely confident in the book’s success only encourages people to judge it more harshly and expect too much of it. If they really wanted the book to sell, they should have just let the praise from other authors and magazines do it justice, as well as the merit of the story itself, of course.

The Firebird Mystery will be published on the 26th of February 2014.