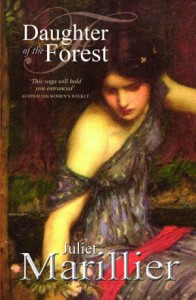 I was given the first instalment of the Sevenwaters novels by Juliet Marrilier as a Christmas present, and found myself hooked. It is an authentic story of a young girl living in Ireland in a time of war with the Picts and Britons. Woven with Irish folklore and spirituality, it is something of a fairytale, however a very painful and grown up one.

Sorcha is the seventh child of a seventh son, and is the only girl in a world of men. She loves her six brothers dearly, who have raised her since their mother’s death. This love is tested when her father’s otherworldly new wife begins to wreak havoc throughout Sevenwaters, cursing her brothers to years of pain. Sorcha is the only one who can save them through an impossible task that takes her further and further from her home and happiness.

Despite its length and weighty content, I found myself unable to put this book down. After days of reading I was delighted to realise that I still had a large portion of the novel to go. Sorcha’s story is compelling – I found myself thinking about her dire circumstances almost constantly, unable to believe that such innocence and youth could be destroyed so quickly and completely in the process of saving one’s family. In order to break the curse placed upon her brothers, Sorcha has to remain silent until her other task is completed. This takes several years, and a great deal of the book is set during Sorcha’s silence. She is so fully enveloped in it that at times I forgot I still had the freedom of speech and would only nod to my family when spoken to. It is hard to fault this book – it is very true to itself and really does transport the reader to ancient Ireland without any stereotypical knights in shining armour or princesses that need saving. It is written with appropriate language, thought and concept, solely through the eyes of Sorcha. Because of this, it is often hard to grasp the logic of the conflict between Sorcha’s kinsmen and those she comes to know, as she is confused about the fighting herself. Often Sorcha’s plight is so hopeless that is is hard to see a light at the end of the tunnel and resolution to the tragedy that is this poor girl’s life. I found this suspenseful, but others may find it off-putting. I can promise you a hopeful and rewarding ending for our very deserving heroine that will put your mind at ease.

There are a few, rare incidents that could be distressing for younger readers, particularly female, as they are brutal and unforgiving. and taint Sorcha’s mind frame for a lot of the book. For this reason I would have to say that this book is not suitable for readers under the age of fifteen or sixteen.

In saying all of that, it is a very enjoyable read, with elements of adventure, romance, drama, fantasy and history that will appeal to most audiences. If you are brave enough to commit to this book (and potentially the series), you are unlikely to be disappointed. I am eager to get my hands on the second book!