It has been the loveliest kind of torture knowing the shortlisted titles for this year’s Indie Awards but not being able to tell you. Now, at last, we are at liberty to announce the 2014 nominees for our favourite annual literary award.

Judged by independent booksellers Australia-wide, the Indie Award recognises the best book written by an Australian author during the previous publication year in each of four categories: fiction, non-fiction, debut fiction and children’s fiction. 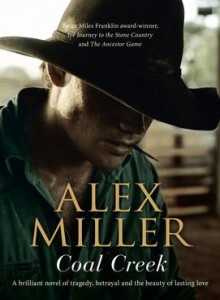 This shortlist was fairly predictable – so much so that Charmaine was able to call it before it even hit our inbox. The four Aussie lit-fic heavyweights of last Christmas are head to head in the Best Fiction category. Much to Kate’s displeasure, they are all men. A notable absence is Thomas Keneally, whose Shame and the Captives appears to have been upstaged by the other big POW novel of 2013 – Richard Flanagan’s The Narrow Road to the Deep North, already being hailed as a masterpiece. Eyrie should provide strong competition – Winton’s prizewinning record is unmatched, and he’s a perennial favourite of Australian independent booksellers. Then again, so is Christos Tsiolkas, whose Barracuda, though rougher around the edges (in my opinion) than The Slap, has made waves with readers and attracted consistently favourable reviews. For all that, we can’t entirely discount Alex Miller, who, if Charmaine’s to be believed, is incapable of writing a bad novel. Coal Creek is no exception. It’s going to be close.

We’re extremely pleased to see The Stalking of Julia Gillard on this list. (Because this bookshop doesn’t have a feminist bias at all.) The Gillard era was being picked apart by countless writers almost before it came to a close, and we’d be happy to direct you towards whole shelves of Gillard-related reading, but if we had to pick one title, this’d be it. David Hunt’s Girt was a customer favourite at Christmastime (because why on earth did no one think of doing an irreverent Australian history book before?), and The Good Life has been one of Hugh Mackay’s most requested titles yet – which is saying a lot. For us, the out-of-nowhere nominee is John Safran’s Murder in Mississippi. We sold a few copies, but none of us have read it, and there have been no first hand reports so far. Can anyone enlighten us?

Nobody should be at all surprised to see our two favourite books of 2013 on this list: Hannah Kent’s Burial Rites and Graeme Simsion’s The Rosie Project. Without playing favourites, I think we can safely predict that the award will go to one of these two. And, even though The Rosie Project was the charmingest, feelgoodest book that has ever embarrassed me at a bus stop by making me laugh too loudly, we’re all secretly hoping it’ll be Hannah. Her overnight rise to fame has been the envy of Creative Writing students across the state (including myself) and her Burial Rites holds a special place in the hearts of a number of our staff members. 2014 should see Hannah rewarded with a string of literary honours and she deserves every one of them. All this, however, is not to overlook The Night Guest, about which critics – and some of our most critical customers – have raved. McFarlane is the underrated nominee on this year’s list, and a discerning panel might favour her. As for Mr Wigg – well, Charmaine just can’t work out what anyone sees in that book. To each their own?

The Children’s Fiction category is too often a case of apples versus oranges. How do you compare a picture book like Alison Lester’s Kissed by the Moon, lovingly illustrated and perfect for reading to babies and toddlers, to Andy Griffiths and Terry Denton’s The 39-Storey Treehouse, which has taken the Middle and Upper Primary semi-graphic-novel to hilarious new heights? In fairness to the rest of the book industry, Griffiths and Denton really shouldn’t win another award or sell another Treehouse book – they’ve already been the smash-hit of the pre-Christmas period three years running. But then again, neither should Anh Do, who won the Indie Award outright in 2012 for The Happiest Refugee. If Weirdo does win, we might just forgive Anh on the grounds that he’s the most emphatically friendly and genuine person you’re ever likely to meet. Not to mention he writes great books. The surprise nominee for us this year is Alphabetical Sydney, which never registered on our 2013 bookselling radar. It may well be a beautiful book – but we suspect its presence on this shortlist is an indication of the high concentration of independent bookshops in New South Wales.

We’ll know the category winners by the end of February. From there, bookstores across Australia will vote to choose their favourite of the four, to be honoured as ‘Book of the Year’. Their decision will be announced on Wednesday March 26, leaving our First Thursday Book Club just eight days to read the winner before their meeting on Thursday April 3. (Because book club on the edge. That’s how we roll.) We will attempt to help you by giving you some indication of who we think it’ll be, but we accept no responsibility for getting it wrong.