The Cuckoo’s Calling is the first adult crime novel written by J.K. Rowling under the pseudonym Robert Galbraith. 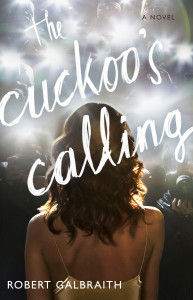 The book follows a disabled war veteran named Cormoran Strike. When we first meet him, things aren’t going too well. Going through a break-up, he is forced to live in his office, which isn’t as bad as you would first think, considering business isn’t exactly what you would call booming.

With only one regular client, a series of weekly death threats, debt collectors chasing him for money and an agency sending him temporary secretaries which he can’t really afford and has no need for, the outlook is pretty bleak.

The most recent of these secretaries is twenty-five-year-old, recently-engaged Robin Ellacott. She is smarter than most of the other secretaries Strike has received, and has secretly always been fascinated by the world of private investigators.

But Cormoran Strike isn’t exactly what she had imagined.

Then a new client walks in through the door, claiming that his sister, the famous supermodel Lula Landry, was in fact murdered. He insists that she did not commit suicide as the police concluded months ago.

Reluctantly, Cormoran accepts the case, doubting that what the man says is true, but the client is the brother of a childhood friend, and the possibility of significant monetary gain convinces him, and so he accepts the case, and the adventure begins.

Well, to be fair, it’s not much of an adventure.

Lula’s death occurred three months ago, and the police determined shortly after that it must have been suicide, and that, to the public, was the end of that.

This book is more about piecing together the troubled model’s last day more than anything, and Lula’s final moments are revealed in a series of intriguing interviews conducted by Cormoran.

With each of these interviews, new suspects appear, new information arises, new evidence comes to light and people are exposed for what they really are. And what they really are is quite surprising, which is to say, I most certainly didn’t see the conclusion coming.

But I would not be shocked if others did; there was considerable evidence piling up against all of them, but subtly pointing towards the true culprit. Though that didn’t stop J.K. Rowling from pointing the finger at everybody at some point in time, and by the midpoint I was sure that a dozen people had all somehow killed Lula.

And I know that this review may seem to be pilling up evidence against the story line of the book itself. But the plot is not what makes The Cuckoo’s Calling such a brilliant book, nor what made me fall in love with it after the first few pages.

It was the characters that made me read the novel, and that make it the masterpiece that it is.

All of the people who had even the slightest role in the book have been developed and created so well they could have been centre stage. But the two main characters, Cormoran and Robin, are just a step above that.

You feel like you are looking down on them, peering through the keyholes, putting your ear against the doors, watching them from above as the go about solving the mystery. You feel like you are best friends with them – their long-lost cousin, or something of the like – because they feel so real.

The character development in this novel is brilliant.

As it has been confirmed that this is the first book in a series, I am eagerly anticipating the arrival of the sequel some time in 2014.

All in all, this has to be one of the best books I’ve read this year.

2 thoughts on “The Cuckoo’s Calling”