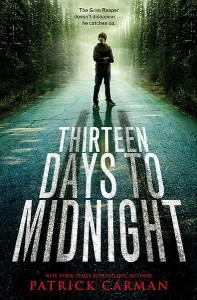 Due to the intense pressure of NaNoWriMo, approaching exams and coffee-strained nights it’s been quite tricky to find the time for reading amongst my busy schedule, however there is one book in particular that I’ve been dying to write a review of for a long time. Thirteen Days to Midnight by Patrick Carman is one intense book. And without giving too much away about the plot (trust me, you’ll thank me for this later), I’ll give a quick summary about it.

Fifteen-year-old Jacob Fielding survives a chilling car accident with his foster parent, who dies in the crash as a result. Scarred, Jacob attempts to cope with the sudden loss by finding solace in the new and daring girl in town, Ophelia James, with whom a romantic relationship soon develops. Very soon, however, the ghosts of the accident begin to haunt Jacob as he discovers that he wields a dark power too dangerous to understand. He is indestructible – nothing can touch him, not even death. And as the plot thickens, Jacob, Ophelia and Jacob’s best friend Milo begin to test the limits of the power, but the enclosing shadows of death begin to pace a few steps closer, and the power begins to take on a very dark form.

All of the characters in the book were terrific. Jacob, our first-person narrator, is blunt and rapid but also sweet and spacey, which made him an interesting character to hear from. Carman also used a very effective technique of allowing the narrator to keep a few cards close to his chest; Jacob doesn’t tell the reader everything. We are left to guess, and that makes us flick through the pages faster and faster. We read something, and we say ‘What? You did this without telling me first!’ which was cheeky and suspenseful at the same time. Jacob plays with the reader.

Another point in the story which I found to be utterly terrific is how the characters actually went about testing the limits of the power. It was mesmerising watching Jacob, Milo and Ophelia get drowned, shot, burned, punched, crushed, stabbed, electrocuted – you name it – and seeing the results of no harm being done. It’s an uncanny concept but a clever one. And as we learn more about the rules of the power, we begin to question ourselves about what we would do in their position – would you use the power to save lives in need? Would you steal death away from people that deserve it? Mess with the powers of nature to sanctify what is right and what is wrong?

The book has a deliciously gloomy feel about it and there is a tremendous amount of action packed into the time span of thirteen days. As I neared the last few pages of the book, I was literally trembling with anticipation. It was a pleasure to read because of its pace; no time or words were wasted. The thematic complexity doesn’t hinder the thrill – rather, it amplifies it. The character of Ophelia was quirky and entertaining, and throughout the book she changes a lot, for the worse – and the way that Jacob deals with this was interesting as well. Jacob’s own character development was equally good; he is the owner of the power, he can do what he likes with it, but will he give into temptation or guilt as a result of not using it when he should?

Overall I give this book a 4.5/5, and I definitely recommend it. It is most definitely not a chore to get through; as clichéd as it sounds, you won’t be able to put it down. It was twisty, dark and atmospheric – it treats its scares like clues in a mystery. It wasn’t the kind of supernatural with sparkling vampires and two-dimensional characters. It had heart, audacity, tempo and tremendous power. Thirteen Days to Midnight is one that will stick with me for a very long time.